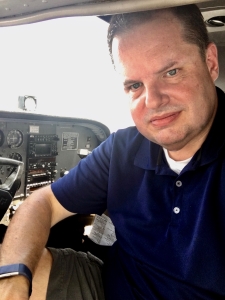 It’s been a long, hot summer here in Austin. We’ve had more than 50 days of temperatures hitting 100 degrees or higher. As I’m not particularly fond of flying in excessive heat, I grounded myself for much of the summer. But today’s high of (only) 90+ degrees seemed like a good time to go flying and reset my currency in preparation for the upcoming cooler flying season.

After a methodical preflight, however, I did one final check of Foreflight radar just before starting the engine and was dismayed to see brand new thunderstorm cells popping up throughout the area. These new cells were tracking directly toward my planned route.

It would have been easy to go. It’s easy to feel pressured to make a go decision after so much time has been invested in the flight. I certainly felt that mental tug toward a poor decision today. I found myself trying to justify a go decision. Maybe I could beat the storms? Or I could route between them? Both were poor decisions, I concluded, and I started the humbling process of shutting down the airplane, packing my headset and sectional chart and securing the plane before driving home.

I’m grateful for the instructors over the years who stressed to me the importance of always being willing to walk away from a flight. One mental trick I use is to assume the flight will be a no-go all the way up to the completion of the Before Takeoff checklist. This way, both the airplane and the conditions need to convince me of their airworthiness. NTSB accident and incident reports are full of pilots who became too invested in their flight and continued on into poor weather or with unairworthy equipment. Mature pilots will resist that powerful temptation to fly when conditions or aircraft tell them to go home.